EXTERNAL FUEL PUMPS
UL and Rotax use external fuel pumps for their injected engines. They are a copy of what was used in cars prior to 1998.
When 2 pumps are used together, for takeoff and landing, the amperage draw can be 10-14. This is a lot since these engines are not equipped with good alternator systems. Even with a single pump running, the draw is scary high if either the generator or external voltage regulator were to fail. The dual fuel injectors and sparkplugs cannot work without electricity.
External pumps produce close to 2 x the required fuel pressure for the injectors. The excess pressure is regulated back down, using an engine mounted fuel regulator.  Excess fuel is returned to the fuel tank.
All this additional fuel, when returned, brings heated fuel to the tank. The total fuel circulating between the main fuel tank and the engine, then returned, is about 30-35 GPH.
Due to the excessive fuel circulating, the amount of fuel gravity fed to the firewall mounted pumps is also 30-35 GPH. Hence the large hoses specified.
Rotax and UL each use a single fuel regulator at the end of the fuel rail, mounted to the hot, air cooled cylinders.  The Rotax brand is likely to be Bosch but the UL is a no-name copy. Each is filled with rubber parts and will fail, sooner or later.
This is now an antiquated way to feed fuel to a fuel injected engine.

EXTERNAL FUEL REGULATOR
What is the big deal about a fuel regulator?  Well, what is the big deal about a wing attachment bolt?
The external fuel regulator is the single point of failure in a UL or Rotax injection system.
An external regulator requires external fuel return hoses.
The regulators used are automotive quality and have a definite life span.
The engine ECU (control computer) knows nothing about fuel pressure.  If the pressure is wrong, the engine will not operate correctly, no matter how many sparkplugs it has.
A single fuel pressure regulator is not consistent with any other dual capability. The engine cannot run without it.
ASTM was never informed of this.

INTERNAL FUEL PUMPS AND FUEL REGULATORS
The Viking fuel system does not use a 35 gph gravity drain system, a single fuel regulator or a complex 6 port fuel selector valve.
The Viking system is based on dual, in- tank pumps, each equipped with its own fuel regulator.
Each pump draw less than 1.6A and has no external fuel return hoses.
Only the amount of fuel used by the engine is gravity fed from the main fuel tanks to the header tank
A fuel level gauge measures the exact fuel level of the header tank, providing accurate fuel gauging.

WHY IS THE VIKING SYSTEM BETTER AND HOW DOES IT WORK

THE VIKING HEADER TANK SYSTEM USED ON THE UL OR ROTAX ENGINES
The system operates exactly as if used on a Viking engine, with one exception.  There is a small amount of calculated fuel return from the fuel rail back to the header tank.  The existing fuel regulator is replaced with a bleed large enough to purge air from the system but small enough for the in-tank pumps / regulators to easily maintain 43 psi of rail pressure.

Some have the belief that UL engines somehow are airplane engines and Viking engines are not.

It is interesting to see how UL is slowly learning. Since the first engine was delivered to the US and the dealer asked Viking for help and to borrow a set of fuel pumps, to the latest UL sevice bulletin regarding their fuel system:

Viking mentioned the issue in the sevice bulletin over one year ago here:

"Since the fuel is at low pressure (suction) as it enters the hot engine compartment, any exposed metal fuel pump body or fuel system component could cause the fuel to boil and cavitate the pump, dropping the pressure from 43.5 psi to less than 10 psi. Once the pressure has been dropped, the pump will not be able to re-gain pressure due to the 43 psi fuel regulator at the other end of the engine fuel rail. (Here is where a small bleed bypass around the pressure regulator would be handy but this is not implemented by either Rotax or UL. The bleed would allow some fuel to flow, re-priming the pump with fresh fuel and again be able to make pressure) "

From this "fix" to their system, and not a complete redesign, it is still years behind what Viking offers their customers and are now also shipping to UL installers. 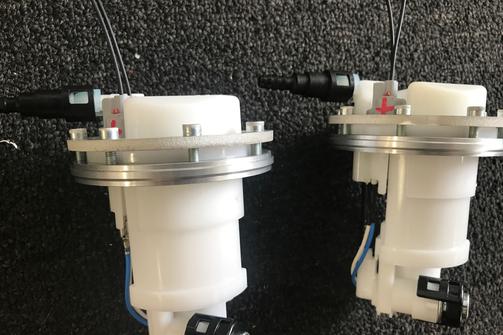 This option allow for a simple fuel system where only the inline high pressure fuel filter and fuel pressure transducer are external to the fuel tank.  No vent or return lines are needed back to the tanks.  Only the venting of the fuel tanks themselves is needed.  Fuel management is simply done through the electrical switches powering the built-in fuel pumps.  Turn on a pump in each tank for takeoff / landing, then use whatever side you would like for cruise.  ​

Your pump assembly is temporarily put together when shipped to show the layout of related parts.
Disassemble aluminum flanges from pump
Have an expert welder TIG weld flanges to bottom of fuel tank after cutting an opening slightly larger than the inside diameter of the flange.
Reinstall pumps with rubber seal using blue LockTite on screws.  Only snug until rubber seal is compressed.
Ground each pump lead to separate terminals on aircraft grounding bus.
Wire positive leads through pump switches and 5A breakers to aircraft positive bus.
Use 5/16 fuel injection hose and Oetiker crimp clamps for all fuel connections.